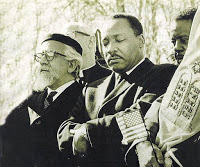 In 1963, the German born American Rabbi Joachim Prinz,  who had a long history advocating for civil rights, participated in the March on Washington for Jobs and Freedom led by Martin Luther King, Jr. Rabbi Prinz  spoke prior to  Dr.  King that morning.

He said, “When I was the rabbi of the Jewish community in Berlin under the Hitler regime, I learned many things.
“The most important thing that I learned under those tragic circumstances was that bigotry and hatred are not the most urgent problem.
“The most urgent, the most disgraceful, the most shameful and the most tragic problem is silence.

He went on to say referring to Germany:

“Not merely black America, but all of America. It must speak up and act, from the President down to the humblest of us ……..not [only] for the sake of the black community but for the sake of the image, the idea and the aspiration of America itself.” Martin Luther King perhaps summed this sentiment up the best when he wrote, “In the End, we will remember not the words of our enemies, but the silence of our friends.”

That was 1963. We have come a long way in terms of addressing racism in our country since Dr. King’s time, but as we look back at our history since Dr. King we see that there are countless examples of racism that serve as reminders that   in fact, we have not come as far as many of us had hoped or imagined.  We all need to continue the work of moving towards   equal justice and equal opportunity to all of our citizens, which was at the heart of Martin Luther King’s mission.

What can we do? In an article last year in Oprah magazine readers responded to the question about how they were personally responding to racism. Here are a few of the answers to that question:

Katherine Isabel, 45, had joined a committee addressing racism in her company that hoped to bring more accountability and inclusion in her predominately white workplace.

Woody Wheeler, 69, took part in the Black Lives Matter protests in Seattle and increased his contributions to the Southern Poverty Law Center.

Sheila Morreale, 51, Franklin, Tennessee, joined the Beloved Community, a movement in the Episcopal Church that promotes awareness and discussions around radical injustice and inequality.

Others are incorporating books about the Black experience into their book clubs. The Dick Marshall Memorial Book Club, of which I am a member, has read and discussed books such as Underground Railroad by Colson Whitehead, The New Jim Crow by Michelle Alexander,  Justice Failed by Alton Logan,  and The Immortal Life of Hernrietta Lacksby Rebecca Skloot, and The Warmth of Other Suns by Isabelle Wilkerson to name just a few.

Most important, we can all stand up to racism in our neighborhoods, in our schools, and in our communities when we see it. When someone makes some racist, belittling or demeaning comment on social media or in our everyday conversations, we need to call them on it. We can discuss the issue of racism within our families, with our children.

We are all aware of the growing anti-Semitism in our country and around the world, especially on the extremes of the political spectrum. We do not hesitate to confront it when it appears. We should do the same with  racism. As Hillel said, “If I am not for myself, who will be for me? If I am only for myself, what am I? If not now, when?

Parasha Ki Ta-vo-uh: “When you Enter the Land”