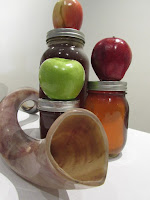 This evening marks the beginning of the month of Elul. The month of Elul is a time of preparation for the New Year. In a few weeks we will gather in this sanctuary to celebrate RoshHashanah. Although we can repent and return to G-d every day of our lives, the sages emphasize that the month of Elul is an especially propitious time to do Teshuvah.   According to our tradition, it was on the first day of Elul that Moses ascended for the second time to Mount Sinai after our people sinned through worship of the Golden Calf. The Blesses Holy One said to Moses, “Come up to me upon the Mount,” and, accompanied by the blast of the shofar Moses returned to Mount Sinai to receive the second set of tablets. In commemoration of this event it is customary for us to sound the shofar at the end of our morning prayers from  this first day of Elul until the eve of Rosh Hashanah – with the exception of Shabbat! It is also the time of year when we make a sincere effort to examine the mistakes of our past and commit ourselves to not return to our errors in the future.

The story of the Golden Calf teaches us that G-d is forgiving. Once the people of Israel reflected on their mistakes and resolved not to repeat them, G-d was willing to take them back in love. They get a second chance to receive the Ten Commandments.  As you might remember, the result of sin was the shattering of the first set of tablets. This represents the breach in the relationship between G-d and the Jewish people. When Moses returns with the second set of tablets, it symbolizes the complete healing of the relationship. Repentance has created wholeness once again and an opportunity for a fresh start.
The Rabbis say that the letters of the month of Elul – Aleph, Lamed, Vav, Lamed – are an acronym for the verse from the Song of Songs – Ani Le-Dodi ve-Dodi Li – “I am my Beloved’s and my Beloved is Mine”. Thus contained in the very word “ELUL” is an invitation to draw closer to G-d during the month. It is through this closeness with G-d that we can overcome our fears and our apprehensions   about looking into our shortcomings. We are assured of G-d’s love for us no matter what we may find when we examine ourselves. But how do we go about this self-examination and teshuvah? Rabbi Aaron Gaber of Newtown, Pennsylvania engaged his congregation in the process of repentance by instituting what he called the “Cheshbon Ha-Nefesh Project” last year. Over a period of ten days in the month of Elul he sent out a series of questions via email to which his congregants were invited to respond in writing. What brought you the most joy over the course of the year?  What caused the most pain?  What was the Jewish high point and Jewish low point? What do you love most about being Jewish and what do you struggle with the most?  What goals did you set for yourself?  How did you achieve them?  What were the obstacles to accomplishing those goals?  What do you most regret over the past year?  Who did you hurt and how can you make up for what you have done?  If you could change one thing about yourself, what would it be?  How might you go about doing this?
In his anthology for the High Holidays the Israeli writer and Nobel Laureate S.Y. Agnon tells the following cautionary tale attributed to the 19th century Rabbi Hayyim of Zans.
There was once a poor countrywoman who had many children. They were always begging for food, but she had none to give them. One day she found an egg. She called her children. “Children, we have nothing to worry about,” she said. I found an egg. But I am a prudent woman. We shall not eat the egg. I will ask our neighbor if we can set it under her hen until a chick is hatched. But I am a wise woman – we shall not eat the chick. We will raise her and she in turn will lay many eggs, and we will have many chickens. But I am a far-sighted woman. We will not eat the chickens. We will sell them and buy a cow. But we will not eat the cow either, for I am a shrewd woman. We will let the cow have calves. We will not eat the cow or the calves but sell them and and buy ourselves a field. Then we will have a field, and we can grow our own crops, and we will never be hungry again!
As the countrywoman was speaking in this way and playing with the egg, it fell out of her hands and broke!
Rabbi Hayyim concludes with the moral of the story. “This is how we are. When the Holy Days arrive, every person resolves to do Teshuvah, thinking in his or her heart, “I will do this, or I will do that.” But the days slip by in mere deliberation, and the thoughts never lead to any action, and what is worse, the person who is merely thinking these thoughts may fall even lower.”
It was the custom in Eastern Europe at one time that the person in charge of prayers would make the rounds of the village, knocking three times on each door and saying, “Israel, holy people, awake, arouse yourselves and rise for repentance.” It is 30 days until Rosh Hashanah. We hear the knocking on the door. Don’t sleep in. Answer the call. Turn in, turn to others, and turn to G-d.
Shabbat Shalom

“On Visiting the Sick”

Parasha Be-ha-ah-lo-techa: How to be a Good Father in Law

Sacred Spaces – A Synagogue Initiative for the #Me Too Era