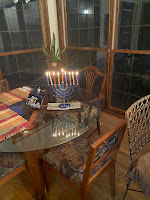 This past Sunday Naperville Community Television visited our Congregation as part of a segment they were producing on “Chanukah in Naperville”. The NCTV reporter visited with Jen Weiner and her kindergarten class as they lit the Hanukkah candles in our sanctuary. The reporter went on to interview the kids about how they celebrate Hanukkah. The first student cut right to the heart of the matter, “We open the presents after dinner.” One of our more competitive students replied, “I spin the Dreidel and I always win!” “I celebrate with my mommy and my daddy and my brother and my doggy,” explained a third student. The reporter then asked me why we involve the children in the lighting of the Hanukkah candles.

I explained, “Chanukah, just like all of Judaism, gets passed on from generation to generation. We have a tradition, a religion that goes back over 3000 years, and the only way to continue that religion is to teach our children.”

“Ledor va-dor”, right? “From generation to generation we will tell of G-d’s greatness”, as the prayer goes. Teaching our children about our religion is a fundamental mitzvah that is articulated in our most important prayer, the Shema, “You must diligently teach your children” — Veshinantam Levanekha ושׁננתם לבניך. The word ושׁננתם means that we should teach our children so well that our instructions leaves an indelible imprint upon them, one that will become part of their very being, an impression so deep it is not easily shed. So important is Jewish education that the Rambam states in his “Laws of Talmud Torah” that “Teachers of small children should be appointed in each and every land, in each and every region, and in each and every village.” He further writes that communities that do not do this should be ostracized until they appoint teachers, and if they still do not appoint teachers, that community deserves to be destroyed, “since the world exists only by virtue of the breath coming from the mouths of children who study Torah.” Pretty strong words, wouldn’t you say?

Rabbi Marc Angel writes about a time a woman came up to him after he had finished a lecture. She told him that she was a Holocaust survivior. After the war she immigrated to this country and had four children. With tears in her eyes she told him that none of her grandchildren were Jewish. Her children had grown up and left the faith. None of them had raised their children Jewish.

Rabbi Angel tried to offer the woman some words of comfort, but he felt his words were inadequate to address the pain that this woman was experiencing and expressing to him. He asked her what synagogue she attended, thinking that perhaps he could encourage her to talk to her rabbi about this. She answered, “ I don’t belong to a synagogue. We have never attended a synagogue. We are not religious.”

Many people believe that a parent can pass down Judaism as a kind of inherited characteristic while neglecting to do the work of teaching their children. Yet research has consistently shown that giving one’s child a good Jewish education is an important factor in ensuring that one’s child will develop a strong Jewish identity they will pass down to their children. Of course, there are no guarantees. We all know of parents who are committed Jews who educated their children, and yet their children did not identify as Jews as adults. And we all know parents who did not belong to a synagogue or did not educate their children, and these children developed strong Jewish identities as adults. And of course, there are adults whose parents were not Jewish at all, who were not raised Jewish, and yet who found something beautiful in Judaism and decided to convert! So there are always exceptions, and there are no guarantees, but research has demonstrated that Jewish continuity is strongly correlated with education, observance and commitment.

In our parasha for this week, Jacob and his family set out for Egypt where they will live under the protection of Joseph. The text says that Judah went ahead to prepare the way (Genesis 46:28). Rashi teaches that Judah went ahead in order to set up a school, a Beit Midrash, so that when they arrived in Egypt Jacob could commence to instruct his children immediately upon their arrival.

Since that time, whenever Jews settle in a new place, one of the first things we do is set up a school to educate our children. Our own synagogue began in the 1970’s when a group of Jewish parents in Naperville decided to form a school so that they could teach their children. “We wanted to make sure our children had a Jewish education. We took matters into our own hands. We were not alone,” Yonah Klem said in a Chicago Tribune article on the occasion of our congregation’s 45th anniversary.

Teaching our children is a holy undertaking, a mitzvah of the highest order. So important is Jewish education that the Rabbi’s proclaimed, “One who teaches another’s child Torah is regarded by the tradition as one who gave birth to the child.” (Sanhedrin 19B) Thus, teaching our children Torah is not only a grave responsibility, but also a supreme privilege as well.

Do Not Stand Idly By